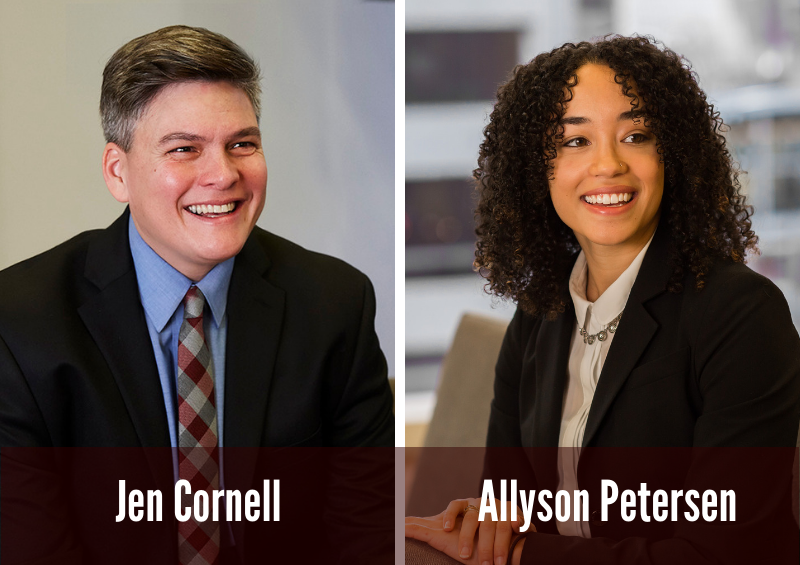 MINNEAPOLIS, Minn. (December 10, 2018) – Nilan Johnson Lewis and the American Civil Liberties Union of Minnesota (ACLU-MN) are proud to announce the award of “Minnesota Lawyer Attorneys of the Year 2018” to attorneys Jen Cornell and Allyson Petersen from Nilan Johnson Lewis and Ian Bratlie and Teresa Nelson from ACLU-MN. The award is for their work representing Anthony Promvongsa in his excessive force lawsuit against the Worthington Police Department, the Buffalo Ridge Drug Task Force and the City of Worthington, which Nilan Johnson Lewis took on as a pro bono project.

In October 2018, the team secured a $60,000 settlement from the Buffalo Ridge Drug Task Force and the City of Worthington on behalf of Promvongsa resulting from Promvongsa’s mistreatment during a 2016 traffic stop. While on his way to a GED class, Promvongsa was pulled over for allegedly tailgating off-duty officers. The lawsuit contended that during the traffic stop, an officer rushed Promvongsa’s vehicle with his gun drawn and then physically assaulted him while he was still in his vehicle. The attack was captured on squad video.

“We are pleased to have earned this award but are even happier to have helped Anthony Promvongsa receive his rightful settlement and recognition for the physical and emotional pain that he was forced to endure,” said ACLU-MN Legal Director Teresa Nelson.

In addition to the monetary payment to Promvongsa, the settlement included a number of changes to the police department’s use-of-force policy designed to ensure accountability for officers. Under the policy changes, all police officers will receive certified training on use of force, felony stops, and de-escalation on an annual basis, as well as annual de-escalation training through PATROL (Peace Officer Accredited Training OnLine). Further, the settlement included changes to the civilian complaint process, which will make it easier for citizens to report police misconduct in the future.

“We are very proud of Jen and Allyson for their handling of this difficult case as well as their ability to work as a team with Ian and Teresa from ACLU-MN to achieve significant results that will not only help Anthony but also improve the community,” stated Stephen Warch, president of Nilan Johnson Lewis.

The Nilan Johnson Lewis and ACLU-MN attorneys will be honored with other award recipients at a banquet hosted by Minnesota Lawyer on February 13, 2019.