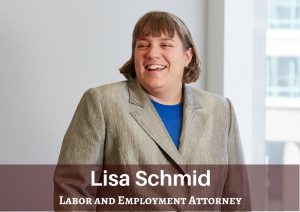 opens IMAGE file On September 7, 2016, the St. Paul City Council adopted a new paid sick and safe leave ordinance. The ordinance was proposed by a special task force appointed by St. Paul Mayor Chris Coleman and the Council and vetted through the St. Paul Human Rights and Equal Economic Opportunity Commission and several City Council meetings. The ordinance will be effective on July 1, 2017, for employers with 24 or more employees, and on July 1, 2018, for employers with 23 or fewer employees.

Lisa Schmid, labor and employment attorney at Nilan Johnson Lewis, has reviewed the ordinance, which in several ways resembles the recently adopted paid sick leave in Minneapolis, including:

Significantly, and unlike the Minneapolis ordinance, St. Paul’s ordinance does not exempt any employer, regardless of size, from providing paid sick and safe leave to eligible employees. After much debate, Minneapolis decided to allow employers with less than six employees to provide unpaid, versus paid, leave to satisfy the requirements of the ordinance, but St. Paul did not reach the same conclusion. “As a result of the difference, small employers whose employees work in both cities will find themselves facing a difficult management situation as they attempt to comply with both ordinances and determine which employees will receive paid versus unpaid leave,” according to Schmid.

St. Paul’s ordinance also differs from the Minneapolis law in that allows individuals to file a civil action if an employer has violated the ordinance’s anti-retaliation measures. Successful plaintiffs may recover not only damages, but also their attorneys’ fees. As a result, employers will want to evaluate current policies and procedures to ensure compliance with the ordinance’s anti-retaliation measures, as plaintiffs’ attorneys will have an extra incentive to take these claims.

Finally, Schmid also expects the Department of Human Rights and Equal Economic Opportunity to develop and adopt implementing rules for the ordinance in the near future, so employers should continue to monitor the situation to ensure full compliance.

Lisa Schmid is an employment attorney who routinely advises employers on various labor and employment matters, including leave-related issues. To speak with her about the St. Paul ordinance, email her at lschmid@nilanjohnson.comcreate new email or call her at 612.305.7549. For media inquiries, contact Aaron Berstler at 651.789.1264 or aaron@kohnstamm.comcreate new email.