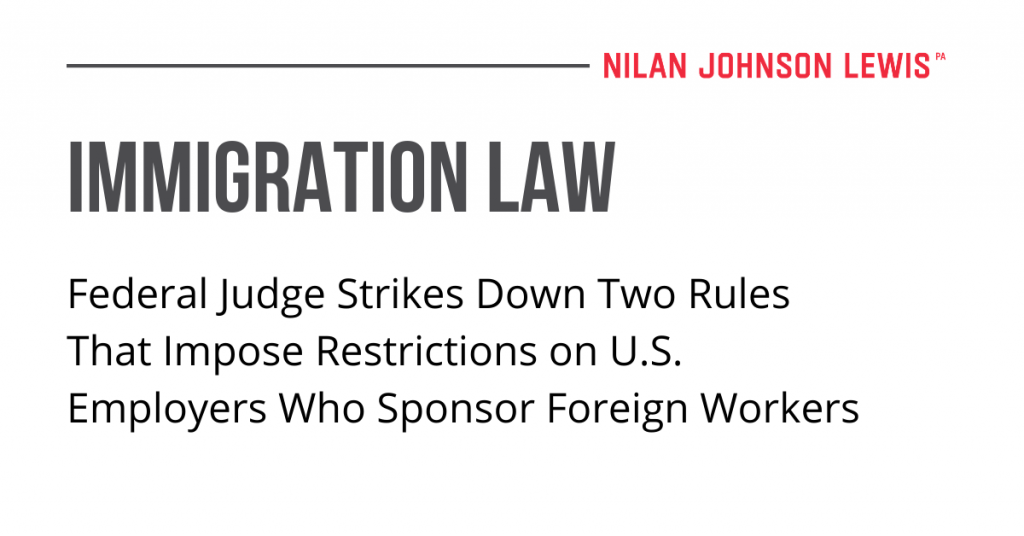 In early October, and without much advance notice, the Trump Administration announced two significant changes for employers who wish to sponsor foreign workers. The first of these announcements (Strengthening Wage Protections for the Temporary and Permanent Employment of Certain Aliens in the United States) affected changes to the prevailing wage that employers must pay foreign workers who are sponsored for temporary or permanent employment. This interim final rule went into effect on October 13, 2020. The second announcement (Strengthening the H-1B Nonimmigrant Visa Classification Program) imposed changes to the H-1B process for employers who wish to sponsor foreign professionals temporarily in the United States. This interim final rule was scheduled to go into effect on December 7, 2020.

Both interim final rules immediately faced legal challenges, and on December 1, 2020, in the case of Chamber of Commerce, et al., v. DHS, et al., the U.S. District Court for the Northern District of California set aside both rules.

At issue was whether or not the Administration was justified in its determination that the COVID-19 pandemic provided a good cause exception to Section 553(b) of the Administrative Procedure Act, which requires a proper public notice and comment period before a rule can be implemented. The court decided that it was not.

“It is beyond question that the COVID-19 pandemic is unprecedented in its scope and its impact, and qualifies as an emergency,” wrote United States District Judge Jeffrey S. White in his opinion. Yet despite this emergency he later adds, “Accordingly, the Court cannot countenance – reluctantly or otherwise – Defendants’ reliance on the COVID-19 pandemic to invoke the good cause exception. The pandemic’s impact on the economy is the only reason DHS proffered as good cause, and Defendants do not dispute that the failure to provide notice and comment was prejudicial. Accordingly, the Court concludes the DHS Rule was promulgated ‘without observance of procedure required by law’ and must be set aside.”

This ruling is a welcome relief for employers who hire foreign workers. The immigration team at Nilan Johnson Lewis provides up-to-date developments in matters pertaining to corporate immigration law. For updates, be sure to sign up here.