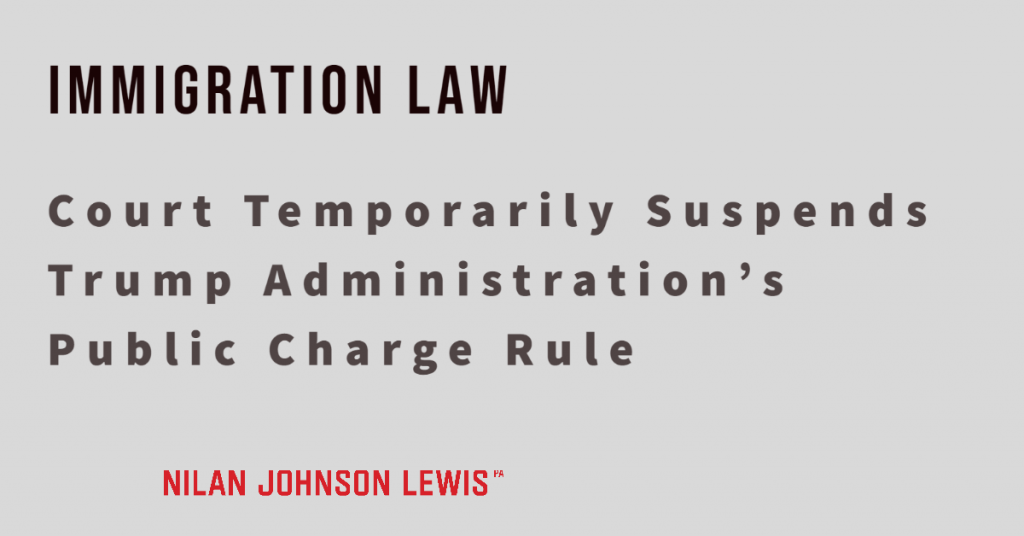 On July 29, 2020, the U.S. District Court for the Southern District of New York issued a nationwide injunction that temporarily suspends the implementation of the Trump Administration’s public charge rule. Under U.S. immigration law, the term “public charge” refers to a ground of inadmissibility for which an individual who is likely to rely on government assistance may be denied an immigration benefit. In guidance published in the Federal Register on March 26, 1999, by the Immigration and Naturalization Service, “public charge” is defined as an individual “primarily dependent on the government for subsistence, as demonstrated by either (i) the receipt of public cash assistance for income maintenance, or (ii) institutionalization for long-term care at government expense.” The current administration has sought to expand the types of benefits that would give cause to believe that an individual is primarily dependent on the government for subsistence, and, thus, inadmissible under U.S. immigration law.

In August 2019, the Department of Homeland Security (DHS) announced a new rule that would change the definition of “public charge.” Under that rule, the expanding list of benefits that could make an applicant for permanent residence inadmissible include: Supplement Security Income (SSI), Temporary Assistance for Needy Families (TANF), Supplemental Nutritional Assistance Program (SNAP), Medicaid (with some exceptions), and certain public housing assistance. The rationale presented to justify these changes was to ensure that those seeking to enter and remain in the United States are self-sufficient and that they would rely on their own resources rather than on public resources. Critics of the rule saw it as another undue barrier to entry for immigrants.

Set to take effect on October 15, 2019, the changes under the new rule faced several legal challenges. First, on October 11, 2019, the Southern District of New York granted a nationwide injunction and stayed the implementation of DHS’ final rule until adjudication of the case on the merits or further action by the Court. After a series of denied appeals, the Department of Homeland Security sought emergency relief from the U.S. Supreme Court, and on January 27, 2020, the preliminary injunction issued by New York’s Southern District was lifted.

DHS and the U.S. Department of State began implementing the new rule on February 24, 2020, for both those seeking to adjust their status to that of permanent residence from within the United States, as well as those seeking immigrant (permanent visas) outside the United States. The matter was again brought before the U.S. Supreme Court in April 2020, this time asking that the Court revisit the injunction due to the outset of the effect of COVID-19. At that time, the U.S. Supreme Court refused to alter its decision and the stay remained.

On July 29, 2020, the U.S. District Court for the Southern District of New York issued a ruling granting a new preliminary injunction that temporarily suspends the implementation of the Trump Administration’s public charge rule during the COVID-19 national emergency. The court found that the plaintiffs provided sufficient evidence to demonstrate that the rule deters immigrants from seeking testing and treatment for COVID-19 for fear of becoming inadmissible, which in turn impedes public efforts to stem the spread of the disease. The judge found that plaintiffs – immigration advocacy groups – were likely to succeed on the merits, arguing that immigrants would suffer irreparable harm in the absence of preliminary relief and that an injunction is in the public interest. Ultimately, this is a small battle won by immigration advocates that suspends the implementation of a controversial policy intended to deter immigration to the United States.

While the dust is still settling, we anticipate that this injunction will ease the process for those applying to become permanent residents. We are hopeful that this decision will prevent the need to complete the cumbersome documentation required to overcome the public charge grounds, which includes intrusive documentary requirements such as a credit report and score, health insurance policies, education records, certifications and/or licenses for every applicant for permanent residence, including children and infants. In the meantime, those seeking permanent residence should consult with an immigration attorney prior to making such an application.

The immigration team at Nilan Johnson Lewis will continue to monitor developments with the public charge rule.