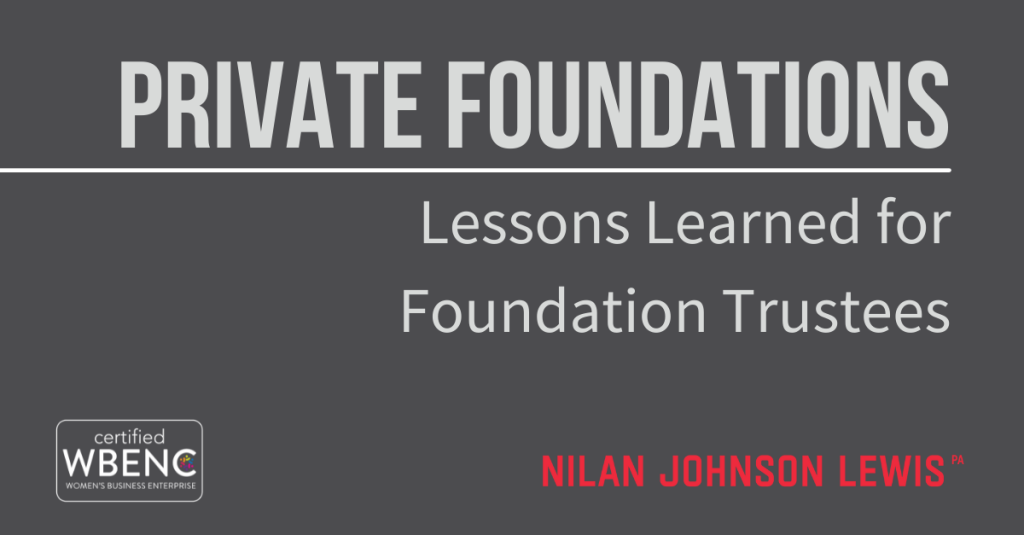 For private foundation trustees, the order provides a wealth of broadly-applicable and important takeaways.

Otto Bremer Trust (OBT) is a private foundation created as a Trust in 1944. Its assets totaled $2B in 2020, 88% of which was Bremer Bank stock. OBT’s three Trustees have served as Trustees for decades, each having inherited their position from family members who served as Trustees before them. In 2014, the Trustees removed the long-time OBT Executive Director and eliminated the position entirely, drawing criticism from other local foundation leaders that OBT was not exhibiting good governance practices. In 2019, the Trustees sold a portion of the shares OBT held in Bremer Bank stock. Bremer Bank leaders saw the sale as a breach of the Trustees’ fiduciary duties and urged the Attorney General to investigate many of the OBT Trustees’ practices. An investigation and this litigation ensued.

The Trust document written by Otto Bremer explicitly authorized the Trustees to compensate themselves for services up to 4% of the cash income of the Trust, to be divided among them as they choose. The Trustees’ payments never came close to 4% of the cash income of the Trust. The Judge concluded that the payment of the investment services fee and the trustee base fee were consistent with the Trust document and constituted reasonable compensation levels based on a third-party compensation study and prior Court approval of the fees. As such, the Judge concluded that the Trustees’ decision to pay themselves fees did not constitute a breach of trust or improper self-dealing.

Leading up to the sale in 2019, OBT and Bremer Bank were jointly considering a merger or sale of the Bank. Such a sale or merger would have given OBT more cash assets by liquidating the Bremer Bank shares held by OBT. When the Bank decided against such a sale or merger, the Trustees decided to go forward alone. The Trustees engaged sophisticated private equity counsel to find a purchaser for a portion of OBT’s stock in Bremer Bank. The Trustees made the sale in part to increase OBT’s cash so that OBT could make its required annual payout. The Court’s order also describes how the sale was intended to effectuate a governance takeover of the Bank by the Trustees. The Court felt the Trustees’ actions were proper, holding that the Trustees were within their rights under the Trust to pursue a sale of the OBT’s interests in the Bank. The Court even said the sale was a “good faith effort” by the Trustees “to protect and enhance the Trust.”

The Court found that Trustee Lipschultz used OBT assets for personal purposes, including using OBT email to send messages related to his personal business, asking OBT staff to manage his family’s calendar and send personal packages. The Court also found that Trustee Lipschultz behaved improperly with the Bremer Bank President and a fellow Trustee. Trustee Lipschultz also bullied and threatened local nonprofit leaders with the loss of OBT grant funding when the leaders did not support OBT in its disputes with Bremer Bank leaders. The Court order says that the bullying and threats were so severe that the nonprofit, Junior Achievement, returned a $1.2M grant to OBT in protest during the pandemic when the nonprofit desperately needed the funding to offer programs.

The Court order states “Lipschultz has shown repeatedly that he cannot operate in a purely charitable manner and has allowed his own personal interests, animosity, enmity or vindictiveness to impact his decisions and behavior as a trustee of one of the region’s most important charitable institutions.”

The other two Trustees, Daniel Reardon and Charlotte Johnson, were not removed by the Court. They will continue to run OBT subject to a future proceeding to determine whether and how a third trustee will be appointed to replace Trustee Lipschultz.

Within the 103-page order, there are many important and broadly-applicable takeaways for trustees of private foundations.

Heidi Christianson is an attorney at Nilan Johnson Lewis PA in Minneapolis. She counsels private foundations on governance, tax, and other matters. She can be reached at 612.305.7698 or hchristianson@nilanjohnson.com.