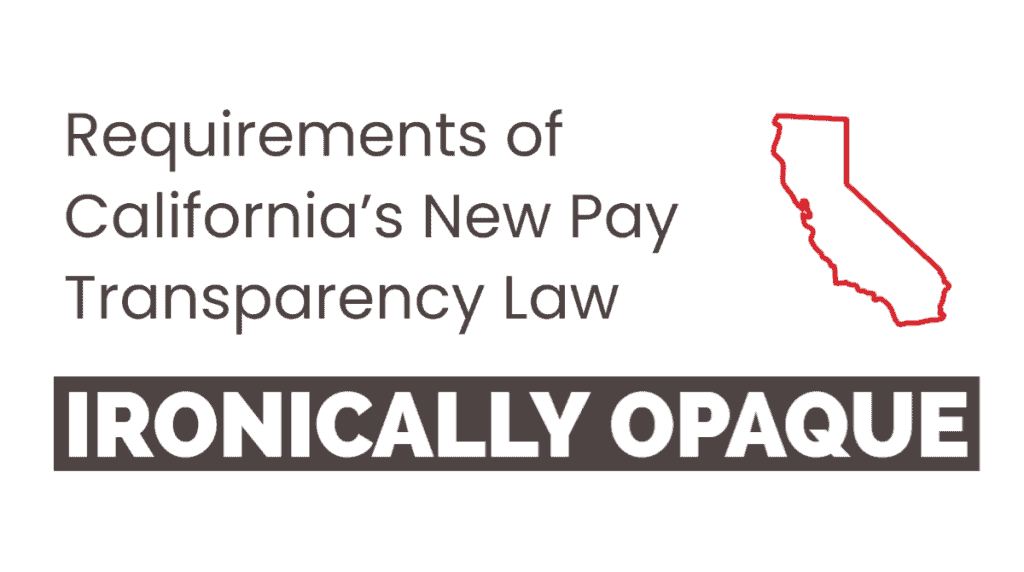 Starting January 1, 2023, California employers will need to comply with expanded pay transparency obligations. And, starting May 10, 2023 (and annually thereafter), they will need to make changes to their annual California pay data reports. While those deadlines are clear, other aspects of the new law are anything but.

California’s new pay transparency requirements align with laws recently enacted in Connecticut, New York City, and elsewhere. Under current California law, employers must, in response to a candidate request, provide the pay scale for a position. The new requirements, which are effective January 1, include the following:

Using the term “pay scale” to describe what employers will pay outside candidates on hire and what they pay current employees creates unfortunate confusion regarding an employer’s actual disclosure obligations.

In response to an employee’s request for a pay scale, should an employer look to what the employee and all of their peers earn? Or just what the employer includes in their job postings for the position? If it’s just the pay scale from job posting, that could lead to awkward conversations with employees who learn that they or—more importantly, their coworkers—are paid outside of the scale the employer shares.

This confusion comes from the borrowed Labor Code Section 432.3 definition of pay scale from, which is the “salary or hourly wage range that the employer reasonably expects to pay for the position.” Plugging that definition into the new disclosure requirement for employees:

In other words, it appears that the “pay scale” is not what current employees in the position are paid, but instead what the employer would expect to pay for the position. I.e., the same pay scale information they would disclose to candidates in a job posting.

As noted, the new law also makes changes to employers’ pay data reporting obligations, effective May 10, 2023, which now include:

Like the transparency obligations discussed above, the new data reporting requirements—as they relate to labor contractors—are unfortunately opaque.

Under the law, a “labor contractor” is defined as “an individual or entity that supplies, either with or without a contract, a client employer with workers to perform labor within the client employer’s usual course of business.” While some commentators have suggested that the intent of the law is to cover contracted workers more generally (including temporary workers and other contingent workers), the law is, by plain terms, limited to disclosure of information regarding “employees hired” by the employer.

“Employee,” in turn, is defined as an “individual on an employer’s payroll, including a part-time individual, and for whom the employer is required to withhold federal social security taxes from that individual’s wages.” In other words, W-2 employees. Given that definition, and since temporary or contingent workers who are placed with an employer by a labor contractor are not the employer’s W-2 employees on payroll, they are not “employees” as defined in the law. So, it would seem that the employer has no pay data reporting obligations with respect to the bulk of temporary and contingent workers.

So if the new law does not include temporary or contingent workers because they are not “employees hired” by the employer, who are the workers for whom employers have a new reporting obligation? A reasonable interpretation is that the new obligation encompasses only those employees of labor contractors who are hired—i.e., converted from contractor, temporary, or contingent worker to W-2 employee—by the employer.

Future rules or other guidance from the state will hopefully clarify this uncertainty. But for now, it’s not an unreasonable reading of the new law for an employer to limit its expanded pay data reporting to include, in addition to its report regarding all employees, a separate report breaking out just those workers who were converted from labor contractor employee to the employer’s employee. At the very least, employers should review whether they have a practice of hiring—i.e., converting—employees from their labor contractors and determine their new reporting obligations with respect to those employees.