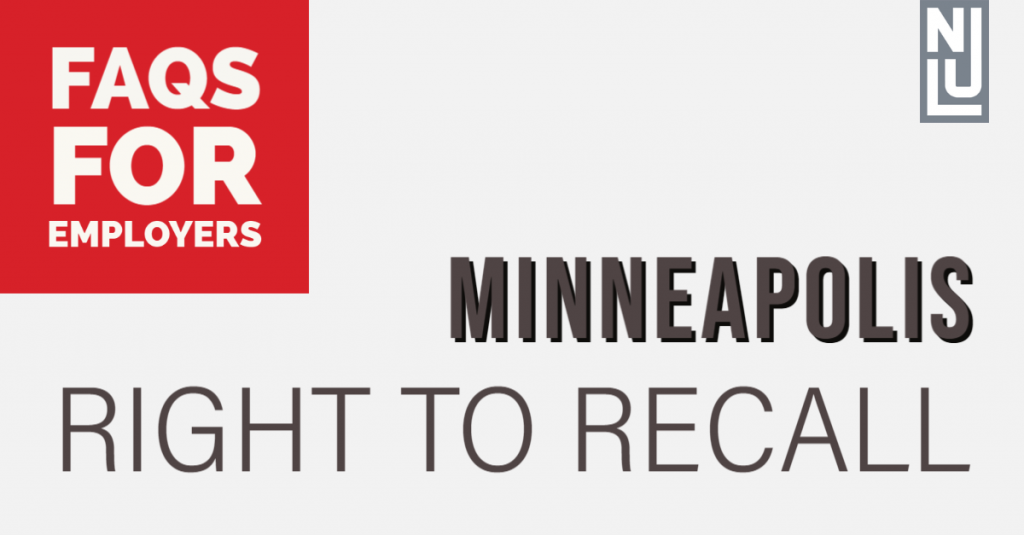 Minneapolis employers in the hospitality industry will likely soon have to contend with a new set of worker protection laws. The Minneapolis City Council is currently considering a citywide Hospitality Worker Right to Recall Ordinance, which would require employers to rehire workers previously terminated due to the Coronavirus pandemic. If adopted, the Ordinance will go into effect on May 1, 2021. Meanwhile, the Minnesota Legislature is considering a similar right to recall law, which would apply statewide to a larger group of employers.

Which Businesses Are Affected By the Minneapolis Ordinance?

As currently drafted, the Ordinance has limited applicability, covering only the following enterprises:

The Ordinance extends to any successor employer that buys a covered employer. The Right of Recall Ordinance exempts government employers, except the City itself.

How Do Covered Minneapolis Employers Comply?

The Ordinance would create recall rights for employees (including temporary and part-time employees, but not independent contractors) who:

Employers must offer those workers any job position that comes open at the covered enterprise that is the same or similar to their prior position; or, alternatively, any position for which the worker could become qualified with the same training the employer would provide a new worker. The laid-off worker then has seven days to respond (if the offer was made by text or email) or ten days to respond (if it was made by mail) before the offer expires. Whenever two or more workers are entitled to the same position, the employer must first offer it to whoever worked there the longest.

Covered employers also cannot retaliate against workers for exercising the rights guaranteed by, or participating in the enforcement of, the Ordinance.

In addition, the Ordinance creates various recordkeeping requirements, including requiring any covered employer to create a list of each laid-off employee, their position, date of hire, and contact information.

What Happens If a Covered Minneapolis Employer Does Not Comply?

Workers can report violations to the City. And the city has the ability to:

How Likely is it That the City Ordinance and State Law Will Be Adopted?

Based on the Minneapolis City Council’s preliminary votes, it seems almost certain that the proposed Ordinance, or something very similar, will be adopted. Given Minnesota’s current divided government, the fate of the Minnesota law is much less certain.

How is the Minnesota Proposal Different?

The bill being considered in the Minnesota Legislature parallels the City’s proposed Ordinance with respect to the substantive right to recall it creates. However, its coverage and remedies are much broader. In addition to hotels, event centers, and connected businesses, the proposed state law would extend to airport hospitality operations, airport service providers, and providers of building services (i.e., janitorial, building, maintenance, or security) to office, retail, or other commercial buildings. Covered entities also include temporary staffing agencies that work in those locations or provide those services. If adopted, the Minnesota law would create a private right of action, which includes attorneys’ fees shifting, as well a state enforcement mechanisms.

What Can Minneapolis Employers Do to Get Ready for the Ordinance?