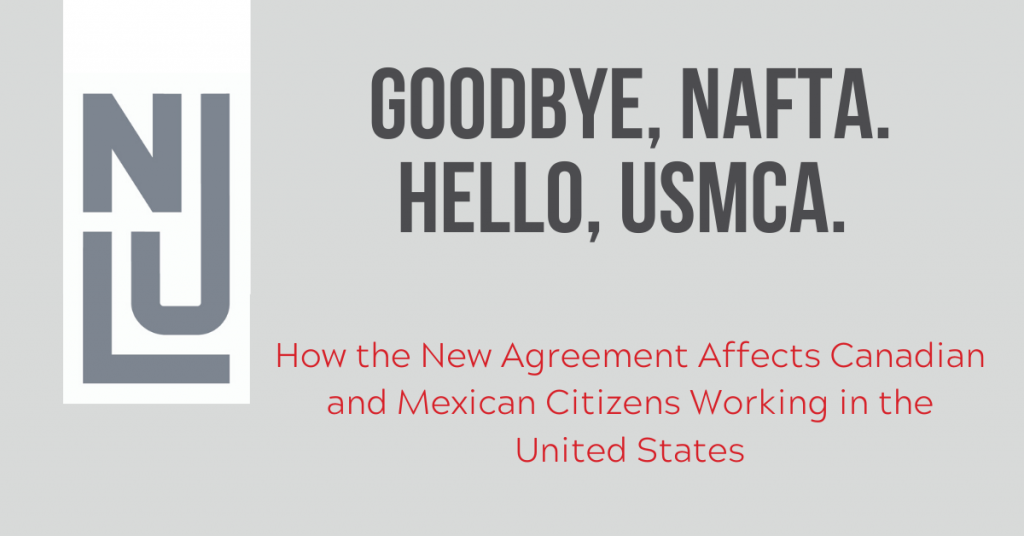 President Trump’s April 2017 Buy American, Hire, American executive order threatened to end or severely limit the free trade agreement between the three countries, so its preservation is a victory for businesses and for professionals who qualify for entry under the agreement.

During the negotiations of the USMCA, experts raised questions about whether the immigration provisions of NAFTA would carry over into the new agreement and whether the scope of the provisions would change. Despite these questions, the language in Chapter 16 of the USMCA – the main chapter addressing the temporary entry of professional and other workers – is nearly identical to the parallel immigration provisions of NAFTA. Thus, the implementation of the USCMA is expected to have no material effect for Canadian and Mexican professionals seeking to enter the United States based on previous NAFTA factors. It is further anticipated that the analysis for determining qualifications for entry in this category will remain the same. As noted below, however, there is still room for clarity.

Because there are no changes to the immigration provisions in the USMCA, certain advantages to entering the United States for Canadian and Mexican citizens under the agreement will remain the same as they did under NAFTA. Below are just a few examples.

It is also worth noting that the recent Presidential Proclamation that bars entry into the United States to those in L-1 and H-1B categories does not apply to those entering under the USMCA.

The biggest disadvantage to admission under the USMCA is that the categories which serve as the basis for entry are more limited than those that qualify for status within other, broader nonimmigrant categories. Given the heightened scrutiny of anyone applying for entry into the United States, it is possible that the processing of visas under the USMCA could be made difficult. For this reason, those seeking to use this category for admission should consult with an immigration attorney prior to making such application. The immigration team at Nilan Johnson Lewis will continue to monitor admission of nonimmigrants under the USMCA and we are here to answer any questions you may have.