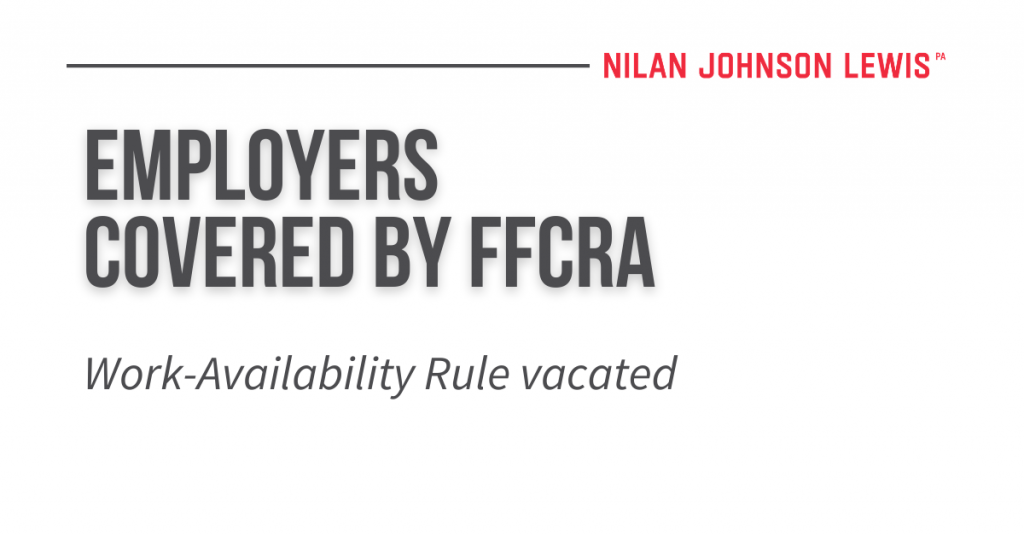 Furloughed employees may be entitled to paid leave under the Families First Coronavirus Response Act (FFCRA) even if their workplace is shuttered due to the pandemic, according to an August 3, 2020 ruling by a federal court in the Southern District of New York in State of New York v. United States Department of Labor.

FFCRA is the first nationwide paid sick leave and paid family leave law, which requires employers with fewer than 500 employees to provide up to 80 hours of paid sick leave to an employee who requires time off from work due to several reasons related to COVID-19. Qualifying employees who cannot work due to childcare or school closures may be entitled up to 12 weeks of emergency paid family leave.

The U.S. Department of Labor issued temporary regulations interpreting the FFCRA in April 2020, just as many employers were faced with a rapidly contracting economy that forced them to implement temporary layoffs while no work was available (or possible). The DOL advised that an employee qualified for FFCRA leave only if there was work available, meaning that employees who were placed on a temporary furlough did not qualify for paid leave.

The State of New York sued the DOL to challenge several aspects of the DOL’s temporary regulations, including the work-availability requirement. The federal court disagreed with the DOL’s interpretation of the FFCRA, vacating the portion of the regulations restricting paid leave eligibility “where the Employer does not have work for the Employee.”

Other FFCRA Provisions Struck Down

The decision also impacted other FFCRA provisions. In short:

What’s Next for Employers?

Although the ruling is likely to be appealed, in the meantime, it applies nationwide. Consequently, all FFCRA-covered employers must now consider requests for paid leave from employees, even if there is no work available to the employee. They must also reconsider policies governing documentation and intermittent leave, and revisit whether they still qualify as a “healthcare provider” (if applicable).

One of the biggest questions left unanswered is whether workers who have remained on extended furloughs are now eligible for FFCRA leave. For now, it does not appear that furloughed workers would automatically be eligible for paid leave under FFCRA. Indeed, a furloughed worker must still establish all other eligibility criteria. Employers should also take care to review the regulations governing how to calculate the average hours worked for such employees, which is generally governed by a six-month lookback period.