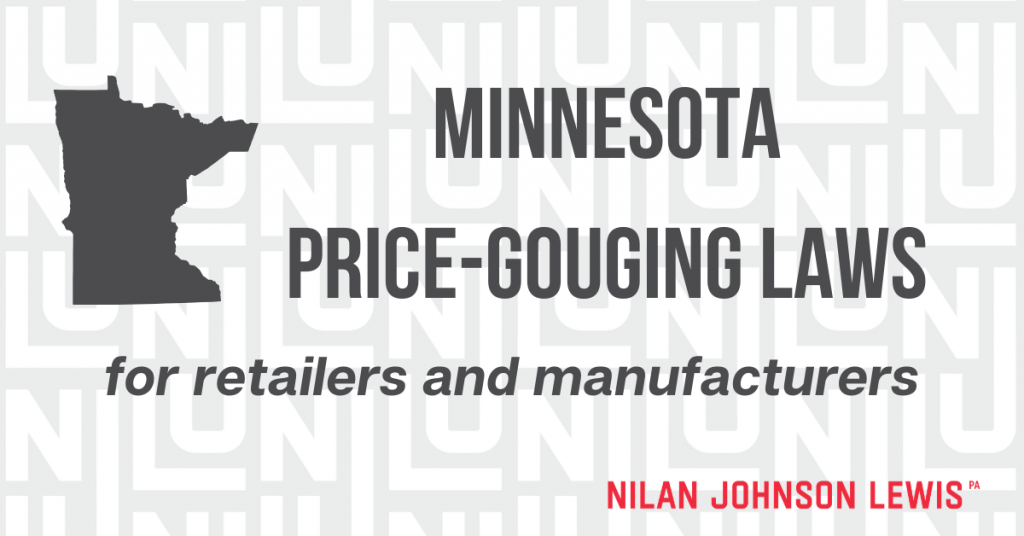 Minnesota Price-Gouging Laws: What Retailers and Manufacturers Need to Know

What does the Executive Order on Price Gouging prohibit?

Minnesota’s Emergency Executive Order 20-10 provides that “all persons are prohibited from selling, offering to sell, or causing to sell in this state any essential consumer goods or services for an amount that represents an unconscionably excessive price.” It went into effect on March 21, 2020, and remains for the duration of the peacetime emergency declared by Governor Walz, or until rescinded.

What is an “essential consumer good or service”?

The Executive Order defines essential consumer goods or services as those that are “vital and necessary for the health, safety, and welfare of the public,” which can be interpreted very broadly. The Order provides the following as examples: food, water, fuel, gasoline, housing, shelter, transportation, health care goods and services, pharmaceuticals, medical supplies, and personal hygiene, sanitation, and cleaning goods. This is a non-exhaustive list of examples. The Minnesota Attorney General’s office is actively soliciting price gouging complaints of any sort, regardless of the specific product or service involved.

What is “an unconscionably excessive price”?

What if I need to raise prices due to market conditions? Can I be liable for price gouging?

A common question that arises is whether a seller is genuinely engaging in price gouging or merely responding to market forces. Minnesota’s Executive Order provides an exception to the presumption of price gouging if the seller can show that the price disparity charged during the emergency “is substantially attributable to significant additional costs outside the control of the person.” The general rule is that a seller may charge higher prices if done in response to its own increased costs that are outside its control, but it may not charge higher prices simply to take advantage of market conditions. The distinction between the two is not always clear. Anti-price gouging laws are notoriously vague and subjective, and many economists struggle to define it.

What are the penalties for price gouging?

Minnesota’s Executive Order authorizes the attorney general to pursue enforcement actions to remediate and enjoin any price gouging activity, and subject violators to civil penalties of up to $10,000 per sale or transaction, as well as recover attorney fees and costs. Although the Minnesota Attorney General has the discretion to impose lesser penalties and has, thus far, reached settlements with various companies, reputational damage from a public complaint and investigation for price gouging during a public emergency can be severe.

Can companies face liability from private litigants for price gouging?

Yes, potentially. In addition to civil penalties pursued by the state Attorney General, companies could face lawsuits from private litigants. Potential plaintiffs include both end consumers or other companies in the chain of distribution.

For example, 3M has recently undertaken a strategy of suing sellers of its 3M-branded N95 mask who have resold the masks at drastically increased prices. 3M’s lawsuits have targeted price-gouging conduct, but have done so through trademark law. The lawsuits allege that the sellers have infringed 3M’s trademark by falsely asserting that they were distributors of 3M products and making buyers believe the exorbitant mask prices were authorized by 3M. 3M has initiated two such lawsuits so far.

Although Minnesota’s executive order (as well as most states’ anti-price gouging laws) does not provide for a private right of action, companies may be subject to lawsuits by consumers or other businesses under unfair trade practice laws or common-law liability theories such as fraud or unjust enrichment. In addition, certain state anti-price gouging statutes do provide for private rights of action, and additional states are considering such legislation.

Minnesota’s private attorney general statute (Minn. Stat. § 8.31) allows private litigants to file a lawsuit to enforce “the law of this state” and permits recovery of damages, as well as costs and attorney fees, when doing so is in the public benefit. Although Minnesota courts have not addressed whether peacetime, emergency executive orders may be enforced by private attorney general actions, enterprising plaintiffs’ attorneys may seek to bring such lawsuits given the potential for considerable damages and statutory attorney fees. The executive orders issued by Governor Walz—although not laws passed by the legislature—have the “full force and effect of law” during the pendency of the peacetime emergency when approved by the Executive Council and filed with the Secretary of State (see Minn. Stat. § 12.32), which has happened in Minnesota.

I need to raise prices—how do I avoid liability for price gouging?

Businesses may need to raise prices for goods and services during the pandemic for a variety of reasons, including increased costs of raw materials, components, distribution, or labor. If price increases are necessary, they should be made to the extent necessary to offset such increased costs. Businesses should document—in detail—the costs increases that made raising prices necessary. Further, businesses should consider the prices set by competitors in the market for similar goods and services, as well as pre-emergency prices, and avoid setting drastically disparate prices. Businesses are entitled to turn a profit, but common sense and equity should be applied to mitigate the risk of a price-gouging complaint.